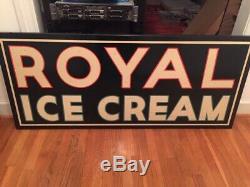 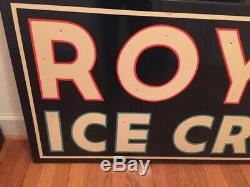 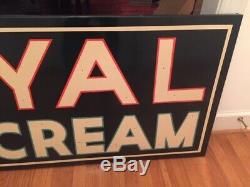 Only one known to exist. This sign is not only a large, porcelain original mfg sign, it's an important part of American History. The Royal Ice Cream sit-in was a nonviolent. Protest in Durham, North Carolina. That led to a court case on the legality of segregated facilities.

The demonstration took place on June 23, 1957 when a group of African American. Protesters, led by Reverend Douglas E. Entered the Royal Ice Cream Parlor and sat in the section reserved for white patrons. When asked to move, the protesters refused and were arrested for trespassing. The case was appealed unsuccessfully to the County and State Superior Courts.

Sparked debates within the African American communities in Durham about the strategies of civil rights activism. It also helped to spark future protests such as the Greensboro sit-ins. And to promote coordination among African American civil rights activists across the Southeast. The Royal Ice Cream Sit-in was largely overshadowed by the later Greensboro sit-ins, the latter of which were generally regarded as the nation's first sit-ins. In 1979, a debate developed around whether a commemorative marker of the first sit-in belonged in Durham or Greensboro; Blackwell M.

"Dog" Brogden, one of the prosecutors from the 1957 Recorder's Court case, stated to the press that the marker belonged in Durham. Starting in 1979, at least four unsuccessful attempts were made to create a marker at the Royal Ice Cream Parlor site. Initially, North Carolina's Highway Historic Marker Committee maintained that the Royal Ice Cream Sit-in did not have enough significance. Durham citizens, however, felt that the event was central to the city's civil rights history. In 2007, the NC Highway Historic Marker Committee reversed its previous position, acknowledging the importance of the Sit-in, and approving a commemorative marker.

That year, a marker was placed at the site with the inscription: ROYAL ICE CREAM SIT-IN: Segregation protest at an ice cream parlor on this site, June 23, 1957, led to court case testing dual racial facilities. It remains in Excellent Condition but does not have the original neon lights that used to be on the front. You can still see the small holes where the neon light holders were attached. This sign is Large, measuring 60" (5ft) wide by 26.5" tall. It is also a heavy sign with porcelain over metal and a solid wood frame on the back.

There are no chips or dings to the porcelain and the words are clear and vibrant. This sign would make a great addition to a museum, school, city hall or other with the addition of it's historical and educational value to our state and local cities.

This sign can be picked up or, I can arrange to deliver it. Thank you for your consideration. The item "Large Royal Ice Cream Porcelain Advertising Sign Vintage Historical Ex.

Co" is in sale since Sunday, February 24, 2019. This item is in the category "Collectibles\Advertising\Merchandise & Memorabilia\Signs\Original\1930-69". The seller is "radiorod" and is located in Wilson, North Carolina. This item can't be shipped, the buyer must pick up the item.